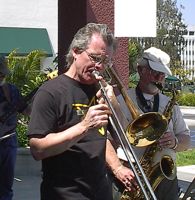 MNy first trombone (that was not a school horn) was a Henry Distin, which I got in a pawn shop in 1976 for $25.00. It was a beautiful horn made of sterling silver with ornate engraving on the bell It had a sweet tone, but the slide was a -10 - the people who'd owned it before me had it as a 'wall hanger' and had been told to use jeweler's rouge to clean it. You could put the slide in any position and shake the horn and it would stay there. Made me very careful. I've only ever met one other person who had one. Any of you ever have one?
Top

There are a lot of Distin saxhorns here in New England. I never had the honor of playing one. Distin was well regarded in the late 19th Century for his instruments. I believe he was gobbled up by the Conn organization at some point.
Bruce Guttman
Merrimack Valley Philharmonic Orchestra
"Almost Professional"
Top

The Distin family started a brass quintet in the early 19th century. They started on natural horns and english slide trumpets but met with Adolphe Sax early on and switched to saxhorns. They toured A LOT, played concerts and resold instruments and their arrangements as a dealer for Sax and other makers. Think of a Victorian Canadian Brass meets The Osmonds. Eventually, one of the sons, Henri Distin, started making his own brass instruments which they marketed as part of their concerts. In the late 19th century he sold his factory to The Boosey Company (which later merged to become Boosey & Hawkes and Besson) and had a non-compete agreement which led to him moving from London to New York where he worked with Slater & Martin and then eventually formed the Henry Distin manufacturing Company which eventually moved to Pennsylvania and then was eventually purchased after Distin's death and turned into Keefer in 1909. Keefer ended up going out of business in the 1960s.

I played American-made 19th century Distin trombones and a baritone that belong to friends of mine in some 19th century period instrument groups. They are very good quality instruments for the time, but that late 19th century early 20th century period is kind of a no-mans land where the instruments hadn't become fully developed yet (super small bore trombones with weird intonation, often designed to play at high pitch, sometimes with also a low-pitch tuning slide which doesn't help the partials either!, valved instruments that have odd intonation tendencies and not as big a sound as current instruments, but not as light and "different" as earlier instruments either...) They are just too late to be of enormous value to player/collectors and most of the HP crowd, but too early to be just really good instruments. There just aren't too many people doing HP for that transitional period, and it is easy to find the instruments.

I'm doubtful about the claim of sterling silver. A lot of Distin instruments were silver plated (and they plated it on REALLY thick in those days) but I've never heard of a sterling instrument from that period. I have seen a lot of distin instruments with very nice engraving and embossing on the ferrules and such.

And you might also be interested in this CD by my friends in the Prince Regent's band. They've done a recording recreating a program of the Distin family band, using many original Distin (London) instruments. It's spectacular playing!

The problem with many trombones of this period and even well into the early 20th century was they never plated the inner slides, they were just raw, usually nickel (?) silver. The friction was enormous no matter how you polished them. I have a couple of trombones dating back to this period, really well made with lovely enraving but a beast to play because of the effort needed to move the slide. No wonder educators of that day through to the 1950's would teach their pupils to produce a note by getting them to spit a piece of paper off the end of their tongue or imagine there was a hair on their tongue and spit it off. With slides this heavy you had to have a real gap in order for the slide to arrive at the right point so every note had to be like the first note! This probably the erason why Distin prefferred valve to slide trombones?
Top
Post Reply
5 posts • Page 1 of 1

Return to “History of the Trombone”